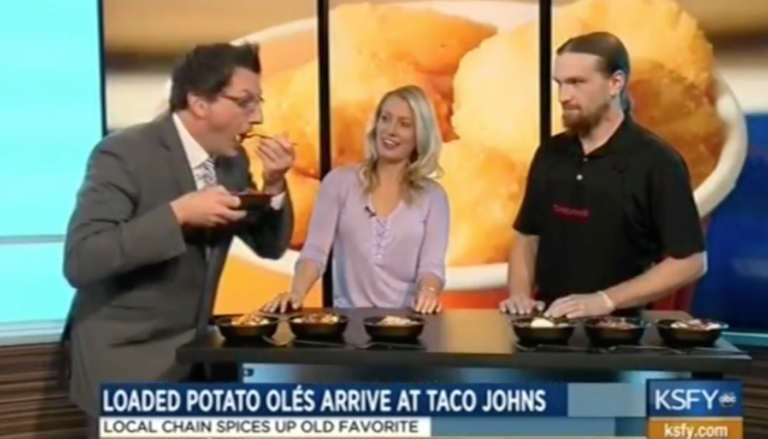 Carroll is the latest team member from Taco John’s to appear on regional morning shows across the country to showcase what some call “turbocharged Potato Olés” — which are available in seven different varieties.

“The signature item of Taco John’s is Potato Olés,” Carroll told morning co-host Kamie Roesler. “So this is a new way to experience our most famous dish.”

“Of course we still have the classic Potato Olés but we decided to enhance them and it’s been a home run throughout,” he said. “Some places are coming close to selling out. We’re thrilled with the response.”

Carroll brought in all seven new menu items including:

Morning show co-host Shawn Cable waited for less than a minute before diving into the Breakfast Scrambler. Upon finishing that dish, Cable grabbed the FLAMIN’ HOT CHEETOS version.

Not wanting to put the dish down, he asked his cohost to do the weather for him so he could continue to eat.

Unfortunately for Cable, she said no. So he took a quick break, gave the weather, and then continued his breakfast mission.

Each of the new menu items begin with the original foundation that everyone has come to love and adore over the past 39 years – round bites of crunchy potato, cooked golden brown and sprinkled with a signature blend of bold spices.