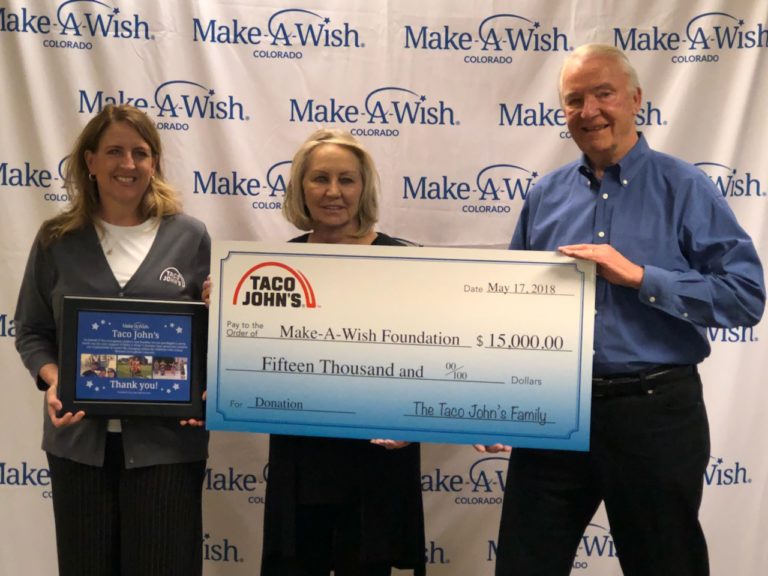 For the second consecutive year, the Association of Taco John’s Franchisees (ATJF) hosted a fundraiser during the annual Taco John’s National Convention to raise funds for Make-A-Wish.

In addition to accepting voluntary donations during the convention in March, Taco John’s sold raffle tickets and auctioned three Caribbean vacation packages, totaling $15,000 with 100% of the proceeds from the fundraising efforts going to the Make-A-Wish Foundation.

“We are overwhelmed with the generosity that was demonstrated by everyone involved with the Taco John’s brand during the March 2018 Taco John’s National Convention,” said Gary Wofford, Executive Director of the Association of Taco John’s Franchisees. “This year, thanks to the support of our Taco John’s family, we raised enough money to grant two wishes for the Make-A-Wish Foundation. I’m excited to present this check and look forward to learning more about the recipients that Make-A-Wish has chosen to support with our donation.”

The ATJF is the primary voice representing interests of Taco John’s franchisee members. The ATJF board of directors is elected by their peers and meets regularly with representatives of Taco John’s International, Inc. to discuss and provide valuable input to strategic issues that affect the direction of the chain.

“I couldn’t be prouder of our Taco John’s franchisees for raising money for the Make-A-Wish Foundation,” said Taco John’s CEO Jim Creel. “This is a testament to what Taco John’s stands for. We give back to our communities and we help those who need it most.”

Last year, ATJF raised and donated $7,500 to Make-A-Wish Colorado. The donation went toward granting a wish for 15-year-old James. After being diagnosed with a spinal cord tumor, James longed for the day where he could escape the walls of his hospital room and feel like a kid again. He knew that a Hawaiian getaway was just the wish trip that he needed. Now that James is home again, he and his family choose to face their hard days by reminiscing about their best days in Hawaii.

“We rely on the help of donors, big and small, to help us in our quest to grant the wish of every eligible child,” said Joan Mazak, President, CEO and Founder of Make-A-Wish Colorado. “Taco John’s generous donation will allow us to take the pure and simple joys of the world and turn them into something unforgettable for children who need it.”

“Make-A-Wish is an extraordinary non-profit, helping grant the wishes of children, like James, diagnosed with a critical illness,” said Wofford. “We are excited and honored to work with them again this year.”

About Taco John’s®
Taco John’s operates and franchises nearly 400 quick-service restaurants in 23 states. Privately owned, the business opened its first restaurant in 1969 in Cheyenne, WY. Taco John’s prides itself on serving generous portions, menu items prepared fresh to your order, high quality ingredients and special recipes, seasonings and sauces. For more information or to apply for a position, visit tacojohns.com.

About Make-A-Wish®
Make-A-Wish® Colorado creates life-changing wishes for children with critical illnesses. We are on a quest to bring every eligible child’s wish to life because a wish is an integral part of a child’s treatment journey. Research shows children who have wishes granted can build the physical and emotional strength they need to fight a critical illness. Founded as one of the first Make-A-Wish chapters in 1983, Make-A-Wish Colorado has granted over 5,000 wishes to children across the state of Colorado. For more information about Make-A-Wish, visit colorado.wish.org or on Facebook, Twitter and Instagram @wishcolorado.